A yurt or the traditional abode of Kyrgyz people

Yurt… – this illustrious type of dwelling is familiar to almost everyone on the planet. Some of you had seen them depicted in those childhood tales, some have had a glimpse of them while travelling to Eastern-Asian countries, and to some of you, a yurt might probably be a part of your domestic culture. But would you like to delve into the details of the Kyrgyz yurts in particular? If so, this brief but informative topic will give you a hell of a good idea.

The first thing you need to know about the yurts in general is that they have been a crucial aspect to the numerous nomadic nations, and back in the past served as a dwelling throughout the whole Central Asia, Russian Siberia, Mongolia and the other Indo-European territories. In Kyrgyzstan, the yurt is the symbol of our heritage and home that evokes proud senses in every kyrgyz heart. Even though nowadays most of the Kyrgyz population lead a modern secular lifestyle living in the flats, apartments and private houses, there still remains a significant role of yurts in modern Kyrgyzstan. 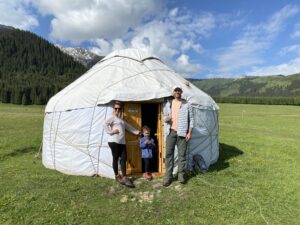 In the remote mountainous areas on so-called “jailoos” (from kyrg. – pastures) the yurt is a vital property of every shepherd, farmer and their families. Being a portable type of dwelling it serves as a house for those folks during the summer months of cattle grazing.

In the towns and capital city the yurt has its use too. People usually set them up in the courtyards and streets on any sort of special occasions: national holidays (Nooruz, Independence Day, etc.), family celebrations (kyrgyz traditions), and funerals.

As the tourism industry in Kyrgyzstan has been on rise for the last couple of decades, the yurt camps have grown very popular among the curious tourists looking for authentic experiences. Every traveller may stay overnight in a yurt for a fair price (usually from $5-20 including breakfast) in the remote valleys and sites like Son Kol lake, Bokonbaevo village, Jeti Oguz valley etc. 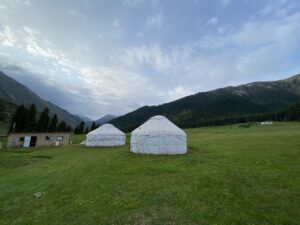 The construction of a yurt is extremely durable and able to stand up to the ferocious winds and earthquakes. Dimensions of an average kyrgyz yurt (alty kanat – 6 sections) are: 6m diameter, 30m², 3m height, 2m diameter of “tunduk”.

The main pieces of a yurt are:

Tunduk – the ring that fixes the dome. Serves as a roof, skylight and chimney. The symbol of hearth and home. By the way, tunduk is depicted on the flag of our country and symbolizes the sun with 40 rays (refers to our history, Kyrgyzstan is the land of 40 tribes).

Uzuk – a felt material that covers the whole dome.

Uuk – the wooden curved poles that make up the dome.

Jabyk bash – an ornamented strip made out of felt.

Eshik – a felt canopy that hangs above the door, can be unrolled down to cover the entrance.

Kanat chiy – a straw matting for covering the framework.

Kerege – a wooden latticework that serves as a foundation of the yurt.

Kyrchoo – a rope that girds the whole yurt.

Tuurduk – a felt material that covers the yurt’s walls. 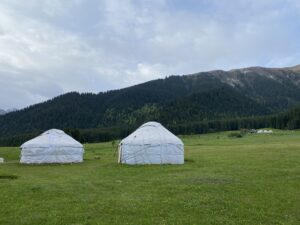 25 sheeps are required to be shaved off to produce felt for one yurt.

25 years – that’s the average lifetime of one yurt in nomadic conditions.

25 days – it takes for a craftsman to make a yurt’s wooden foundation.

Disassembling a yurt is a bit harder task and usually takes about 2 hours.

The whole structure can be loaded up on two horses.

In 2014, at the World Nomad Games, the Kyrgyz national team set the world record having assembled a yurt for 17 minutes. http://worldnomadgames.com/en/page/About-the-WNG/ 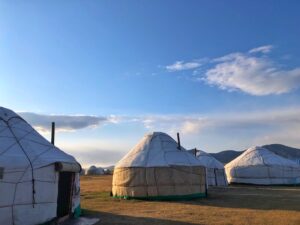 Well now, you’re already educated with those bits and pieces about the kyrgyz yurts. Being fairly easy to erect and transport, waterproof due to felt and of the durable structure – a yurt was a perfect solution for our nomadic ancestors! Nowadays, there are numerous yurt assembling shows held for tourists in Kyrgyzstan. So not only can everyone witness the demonstration but can also participate in this exciting experience. You know what to do! Grab your family or friends and come to visit Kyrgyzstan with all its wonders…https://venturatours-kg.com/trip-type/multi-day-tours/